The T.E.R.A. project aims to increase the impact of classical therapies by using less-used methods in the field of social assistance. This project is a continuation of the “RoboTerapy” project, in which 9 members of the therapy team have received training courses for the use of technology in therapies. By technology we mean automated, programmable and scalable devices that have sensors, identified as robots. The previous “RoboTerapy” project began with the acquisition of a Lego robot, which can have a variety of shapes, from machine to humanoid. Acquisition, which was initially more a test, as we did not know what impact it would have on the beneficiaries, and it proved to be extremely beneficial. I have noticed how much attention the children and young people give to objects they do not see very often. Astonished, they ask questions: “Does it really go BY ITSELF?!” Ever since the first Lego robot presentation, I was impressed by the “UAU!” effect it had on the beneficiaries. An effect that is continuously present with the help of robots, because it can be built and scheduled all the time to do something completely new. The Lego robot had an even greater impact as the children built it from individual pieces, and ultimately it “came to life”. Observing the benefits of technology for the beneficiaries, we trained 9 therapists to use sensors, to program and use robots in individual therapies with children with special needs. The T.E.R.A. project continues this “UAU!” effect. We want to increase the robotized auxiliary staff so that each therapist has access to a robot during therapy. Moreover, we want to organize, twice a week, a group of children with special needs who will build and learn to use the robots. The structure of the robot group will be: 4 children to be divided into 2 teams of 2 children, each team with a set of robots to build. They will collaborate (socializing, team building) to build robots (imagination, creativity), program (intelligence development) and compete (robot improvement and defect observation) in different missions. The aim of the project is to increase the effectiveness of therapies for children with special needs. Also seen as game therapy, robots stimulate children’s creativity, intelligence and communication. 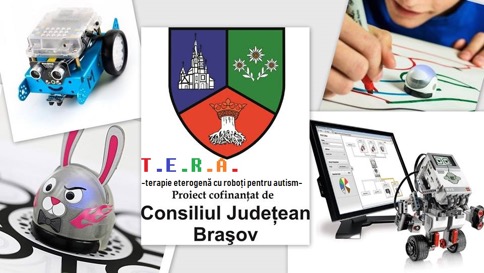